Ruth Kerubo Nyakundi is an FLP awardee from Kenya from the Institute of Primate Research. Ruth’s PhD project is entitled “Production of monoclonal antibodies to malaria antigens”. Ruth chose the DCase Western Reserve University, Center for Global Health and Diseases, USA under Christopher L. King for her PhD exchange project.

Acknowledgement
I would like to thank the FAIS and International Union of Immunological Society (IUIS) for funding this attachment at Case Western Reserve University. I would also want to thank Professor Christopher L. King and all the lab members particularly Lenore Carias, for their help and support and making my learning experience very memorable.

Summary
With the FAIS-Legacy grant, I undertook a four month training at the Case Western Reserve University (CWRU), School of Medicine, Centre of Global Health and Diseases, Cleveland, Ohio, USA, under the supervision of Professor Christopher L. King. The training period was from 16th July to 10th December 2019. During his period, I learned techniques on how to generate human monoclonal antibodies against Plasmodium vivax DBPII proteins from samples of Colombian individuals with natural immunity to malaria infection. I was able to learn techniques transferable to my home lab and also the opportunity supported completion of part of my PhD requirements. I was also able to meet with other scientists which may provide future collaborative prospects.

In summary techniques learned during my visit at CWRU is shown in the diagram below:

Introduction
Plasmodium vivax is the most widespread human malaria causing pathogen. Though mortality rates are not as high as those recorded with P. falciparum infection, the infection causes serious morbidity with recurrent relapses due to activation of dormant liver stage parasites. Due to this characteristic, conventional malaria control strategies including treatment, use of bed nets, vector control are less effective. An effective vaccine would therefore play an important role in control and eradication of P. vivax infections. In professors Kings Lab, they targeted the P. vivax Duffy-binding protein II (PvDBPII). During infection, PvDBPII cysteine rich domain engages with the N-terminus region of the receptor for chemokines (DARC) on the host erythrocyte surface facilitating invasion into the red blood cells. Studies have shown that individuals who are DARC negative rarely get infected with P. vivax simulating its importance during invasion and therefore making it a good vaccine candidate. My study involved generation of human mononclonal antibodies against PvDBPII from Peripheral Blood Mononuclear cells (PBMC) of individuals with natural acquired immunity to P. vivax infection.

Methods
Cell sorting
Frozen PBMCs from individuals with high antibody levels to PvDBPII were thawed and Memory B cells isolated using a BD fluorescence-activated cell sorter Aria II. fluorescence activated cell sorting (FACS). Briefly, PBMCs were incubated with 100μl of CD19+ and CD27+ monoclonal antibodies for 30 minutes. Cells were washed twice by adding 1 ml of Phosphate Buffered Saline (PBS)/Foetal Calf Serum (FCS) solution and centrifuged for 4 minutes at 4000xg, 4oC. The supernatant was discarded, the pellet resuspended in 100μl of the viability dye 7-AAD and incubated for 15 min in the dark. Cells were washed twice and the supernatant discarded The cells were resuspended in 400μl of PBS/FCS and passed through a pre-wetted (with PBS/FCS) 35 mm cell strainer cap into a round bottom tube. The cells were centrifuged for 1 min at 8 × g and kept on ice until they were loaded onto the cell sorter. The cells were sorted into 96 well PCR plates containing 4 ml of lysis solution per well. The plates were sealed with Microseal F foil and storing at −80°C.

Second PCR products of the expected size (450 bp for IgH, and 405 bp for IgL) were sent for sequencing.

Expression vector cloning
To perform directional cloning and expressed in Escherichia coli, gene-specific PCR was performed and products purified using a PCR purification kit. The PCR products were digested by addition of an enzyme mix and was mixed, sealed with PCR film and incubated for 2 h at 37°C. Digested PCR products was purified using the PCR purification kit. The digested and purified PCR product were ligated into the expression vector and incubated overnight at 16°C. The following day, ligated product was added to thawed bacteria, mixed and incubated for 30 minutes. Heat shock for 45 s at 42°C was performed, 200 ml culture medium and incubate at 37°C for 30 min under moderate shaking. Bacteria was plated on ampicillin containing LB culture medium agar plate and incubate over night at 37°C. Colonies used for insert PCR were labelled to screen bacterial colonies for the presence of appropriately sized inserts. For the next PCR run, PCR master mix was added to new 96-well PCR plate and inoculated with bacterial colony. PCR products was run on a 2% agarose gel to verify amplification. Products with the expected size were sequenced. Colonies with 100% sequence identity to the second PCR products were inoculated in 4 ml Terrific Broth with 75 mg/ml ampicillin in round bottom tube. They were incubate for 16 h at 37°C, 200 rpm. Plasmid DNA from the bacteria culture was isolated using a plasmid purification kit concentration determined at A260 and A260/ A280 ratios with a spectrophotometer.

Recombinant antibody production and purification
The resultant recombinant DNA was produced in large scale using polyethylenimine (PEI)–DNA mediated transfection cultured in Human Embryonic Kidney cells (HEK293). HEK 293 cells were grown in 250ml culture flasks with 30 ml Exi293F cell culture medium at 37°C, 8% CO2. Start concentration was at 0.5 x 106 cells/ml and incubated for three days. Cells were then split to a concentration of 2 x 106 cells/ml in 27 ml of culture media and incubate for a further 24 hours to attain concentration of 4 x 106 cell/ml. 30μg of DNA (15μg IgH and 15μg IgL) were added in 3ml of Exi293F and 90ml of PEI and vortexed. To form the DNA-PEI complex, this mixture was incubated for 15 minutes at room temperature. The mixture was then added to the cell culture containing 4 x 106 cells/ml HEK293 cells dropwise with swirling. 24 hours later valproic acid was added to increase production and further incubated for 24 hours. Glucose was then added with a further 3 day incubation after which the antibodies were ready to be purified.

Recombinant antibodies were then purified from culture supernatant by HIS chromatography and concentration determine using a spectrophotometer.
The resultant amount of monoclonal antibody produced was approximately 40 μg/ml.

Challenges
The initial proposal was to isolate P. falciparum RH5 and AMA1 monoclonal antibodies from Kenyan individuals with high antibody levels to these antigens and manifested acquired immunity to malaria infection. However, the viability of PBMCs from these individuals were very low and we were unable to use them for the downstream process.

Other techniques learned included isolation of CD19+ B-cells by a magnetic separating column (MACS system). For highly reliable detection of PfRPHS memory B-cells from small quantities of PBMCs, antigen tetramers were used to increase the avidity of B cell receptors labeling and brightness of staining. Following incubation and formation of tetramers, cells were stained with CD19+ and CD27+ antibodies and sorted by FACS.

Conclusion
I am grateful for this opportunity since it has given me additional skills that will be transferred to my home institution since it can be adopted and applied to other diseases. This opportunity was also important in partial completion of my PhD requirement. Having knowledge of production of monoclonal antibodies gives me an edge in the science world therefore enhancing my career. During my stay, I met different scientists who work in tropical diseases and was able to form contacts that hopefully may result in future collaborations. My experience in the lab was great and everyone was very helpful.
Apart from the lab work I was able to enjoy many walks in the beautiful the city parks especially during autumn when the trees started changing colours and also visit the Cleveland Museum of Natural History. 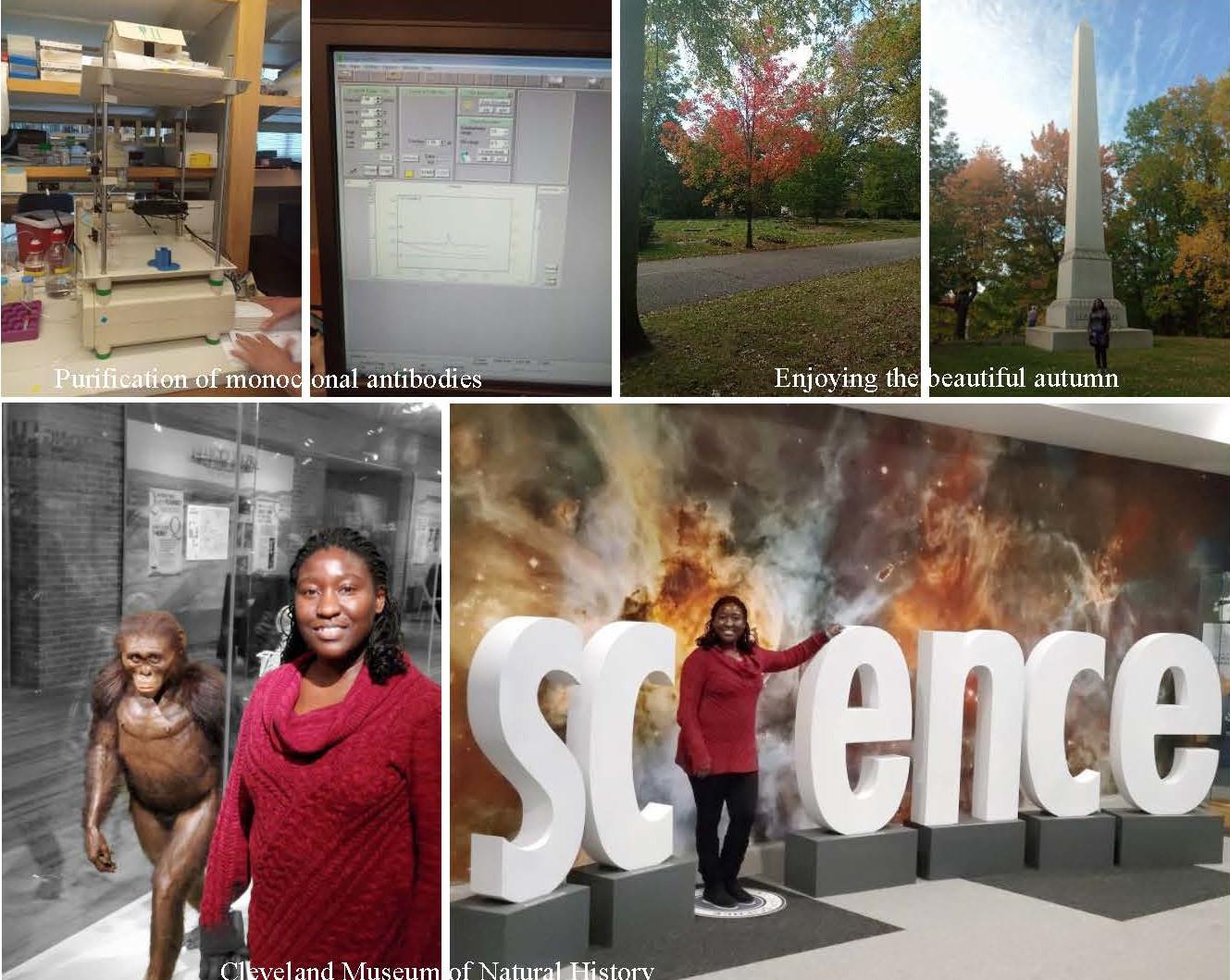